This document describes the function of each of Brigade’s major components and how they integrate with one another to provide an event-driven scripting platform. It also provides some historical context for how maintainers arrived at the current architecture.

It is useful to begin with an implementation-neutral description of Brigade’s most important concepts. This is a non-exhaustive introduction to topics that are covered more thoroughly elsewhere in the documentation.

Events originate in external systems and arrive in Brigade’s event bus via gateways and the Brigade API.

Projects are user-defined. They pair event subscriptions with configuration and scripts that will handle those events. 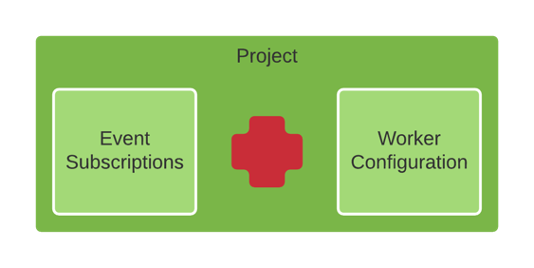 The Lifecycle of an Event

When a new event arrives at the Brigade API server, a discrete copy of of it is enqueued on the event bus for each subscribed project.

As capacity permits, a worker described by project configuration is launched to handle each event by executing script.

The following depicts the major components of Brigade: 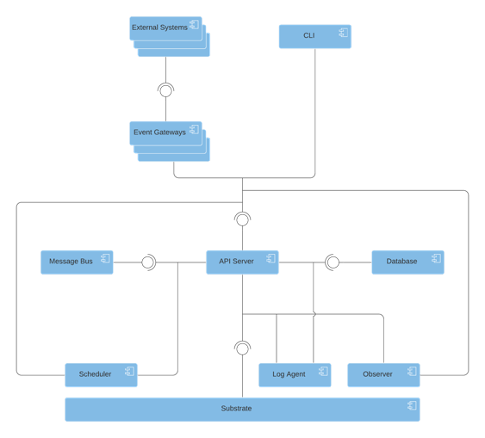 The following sections describe each of these components in greater detail. They are presented in an order that is intended accelerate understanding of the high-level architecture for project newcomers.

Brigade’s tagline has long been “event-driven scripting for Kubernetes,” but since v2, Kubernetes is effectively an implementation detail.

With an exception for advanced use cases wherein a Brigade script may modify the Kubernetes cluster in which it executes, and therefore may require some cluster-specific setup, end-users of Brigade do not interact directly with Kubernetes. Instead, users interact with Brigade using Brigade’s own API. (This is usually indirectly, via the CLI or other tooling.)

The API server treats Kubernetes as one of several back-end components. Specifically, it utilizes Kubernetes as a “workload execution substrate.” In other words, it is used to host containerized environments in which to execute users' scripts.

While project maintainers have no immediate plans to support alternative substrates, it is nevertheless worth noting that Brigade was explicitly designed in a manner that retains the possibility of doing so.

All of Brigade’s most important functions are abstracted by a RESTful API. The API server implements and serves that API.

Other Brigade components' interactions with back-end systems such as the database or substrate are generally abstracted by the API. Most components, therefore, depend on the API server.

It is fair to regard the API server as Brigade’s “brain.”

The API server utilizes MongoDB for all record keeping. This includes, but is not limited to, storing user-defined projects, events, and even logs produced by users' scripts.

The API Server utilizes Apache ActiveMQ Artemis, which implements AMQP 1.0 (Advanced Message Queueing Protocol), as its internal event bus. A queue per Brigade project ensures events for a given project are handled on a FIFO (first in, first out) basis.

Event gateways are peripheral components, installed separately from Brigade itself. Their role is to receive events from external systems, transform them into Brigade events, and utilize the Brigade API to enqueue them in Brigade’s event bus.

The scheduler component listens to each project’s queue on the event bus and also uses the API to monitor capacity on the substrate. The scheduler allocates available capacity by making API calls to launch workers to handle each event.

When the demand for substrate capacity outpaces supply, the scheduler pseudo-randomly allocates newfound capacity. This incorporates a degree of “fairness” into Brigade’s scheduling and prevents projects with high event volume from monopolizing substrate capacity.

The role of the observer component is to directly monitor workloads on the substrate and report their status via the API.

When a workload is observed to be complete, the observer is also responsible for evicting the workload from the substrate after a short grace period. This is not done directly, but again, via an API call. The purpose of the grace period is to improve the likelihood that log agents capture all logs produced by users' scripts before the workers that execute them are deleted forever.

A worker is a containerized script execution environment that is launched on the substrate to handle an event. Because that underlying substrate is Kubernetes, a worker is implemented as a Kubernetes pod.

The default worker Docker image can execute scripts written in JavaScript or TypeScript using Node.js. It can also resolve any of a script’s dependencies using either npm or yarn.

It is also possible, through project configuration, to use workers based on an alternative Docker image. Such images could provide support for handlers that are defined using alternative scripting languages or even a declarative syntax.

Brigade utilizes an instance of Fluentd per Kubernetes node to scrape logs from worker containers and forward them to the database. This ensures that logs produced by users' scripts are persisted beyond the short lifetime of the workers that run them.

Like its sister project, Helm, Brigade was born at Deis prior to the company’s eventual acquisition by Microsoft. Both projects were the product of the same process. Viewing Kubernetes as a sort of “cluster operating system,” the team at Deis sought to identify features of a traditional operating system that are often taken for granted, but were conspicuously absent from Kubernetes. Kubernetes lacked a package manager and that directly led to the inception of Helm to close that gap. Similarly, Kubernetes lacked a scripting environment – and that is the gap that Brigade was designed to close.

Brigade reached a stable, 1.0 release in March 2019 and was donated to CNCF at that time, becoming a sandbox project. Four minor releases followed.

By early 2020, Brigade had proven reasonably popular among among CNCF survey respondents. Popular though it may have been, maintainers had also accumulated enough feedback from the community to recognize some course corrections were required to position the project for greater success. Most insights led back to a fundamental need to better abstract Brigade users from the underlying complexities of Kubernetes. A formal proposal for Brigade v2 was drafted by maintainers and ratified by the community. Over the following two years, Brigade was re-written from the ground up. Brigade v2 was released December 1, 2021.